Incoming Asteroid:  What Could We Do About It?   What Would We Do? 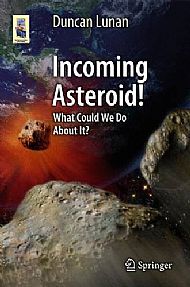 Published by Springer in October 2013.

Can be ordered through Springer, Amazon and many other outlets..

"Incoming Asteroid" is based on a discussion project which began within ASTRA, the Association in Scotland to Research into Astronautics.    Past President Bill Ramsay raised the question, 'What would we do if we knew there was going to be an impact in ten years' time?'   After discussions in Glasgow a seminar was held at the Spaceguard Observatory, Powys, in October 2003, followed by another series of meetings in Glasgow and a seminar in 2012.

Chapter 2.  Asteroids.   Size and composition of Earth-grazing asteroids;  recognition of the asteroid threat in the 1960's, e.g. by Dietz and Enever;  Alvarez and the iridium layer;  finding the Chicxulub crater;  other impacts.

Chapter 3.   A Designer Hazard.   For the project to be realistic we need to envisage a danger which is neither too great to counter, nor too easy to deal with;  we need to have enough time to take action, but not so little that nothing can be done;  an orbit which can be reached with foreseeable propulsion systems, but allows reasonable notice of the danger – in short a 'Negative Goldilocks' scenario.   The ASTRA discussions decided on a rocky object 1 km in diameter, in an orbit ranging from the outer rim of the Asteroid Belt to within the Earth's.

Chapter 4.   Detection and Reaction.   With the help of Jay Tate of Spaceguard UK, and Dr. David Asher of Armagh, the October 2003 seminar worked out a plausible scenario for detection and initial announcement of the threat.   The political response was considered at a public meeting with Lembit Opik, MP, in Glasgow.   Both were , updated in 2012, and are considered in relation to the Deflection Dilemma, i.e. the possibility for using asteroids as weapons, and other political considerations.

Part Three.  What Would We Do?

Chapter 5.   Deflection – the First Scenario.   Options for reaching the asteroid and deflecting it include ion drive and solar sails.   Other options for deflecting it include solid projectiles, nuclear weapons, nuclear-electric lasers, and for preference the Solaris 'Comet-chaser' mirror, along with the ‘Archimedes’,‘Mirrorbees’ and ‘Laserbees’ variants.

The technical team was headed by Gordon Ross of the Industrial Design Unit at Glasgow School of Art, now of Advanced Design and Prototyping, and the late John Braithwaite of Braithwaite Telescopes and Altair Technology Innovations Limited.   Technical discussions are ongoing with Dr. Max Vasile and Prof. Colin McInnes, initially of Glasgow University and now at Strathclyde University.

Chapter 6.   Second Scenario – Manned Missions.   If the first attempt with unmanned vehicles is unsuccessful, on the next pass a manned mission could be launched with NERVA propulsion.   The mission would be to deflect the asteroid using mass drivers, and other methods in tandem as required.

Chapter 7.   Final Options.   If the manned mission fails, and the asteroid is now on its final approach, last-ditch options include nuclear weapons, including the Zaitzev Phoenix concept;  kinetic impactors;  and orbiting beam weapons.   Meanwhile if all else fails, the late Dr. Arthur Hodkin argued, the loss of life can be drastically reduced by building stockpiles of essential supplies including oil reserves.

Part Four.  The Aftermath and the Present.

Chapter 8.   The Starseeds Grow.   The technology needed to deflect the asteroid opens the doorway to Solar System industrialisation, and beyond that to interstellar missions spreading the human race across the Galaxy.

Appendix 1.   The Politics of Survival.   Duncan Lunan's thesis on space technology and human survival, from which the Incoming Asteroid project derived.

Appendix 2.  Stockpiles for Survival.   Dr. Arthur Hodkin’s list of measures to be taken to reduce fatalities if the worst happens.

Articles and letters on our deflection scenario have appeared in the Glasgow Herald, Space Policy, Analog, Asgard and the Cambridge Conference Net.   The Politics of Survival thesis was unveiled in a lecture at the Environmental Sciences Society at Stirling University, and has been published in Science and Public Policy, Asgard, and in translation in Katedra  (Slovenia).

Duncan Lunan talks to the The British Interplanetary Society

Duncan talks to The British Interplanetary Society on the subject of his book Incoming Asteroid! What could we do about it?