MAN AND THE PLANETS 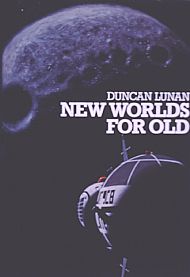 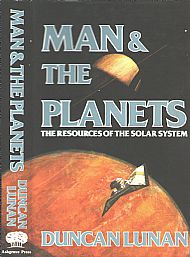 After the Interstellar Project produced “Man and the Stars”, ASTRA went on to the Interplanetary Project which ran from 1973 to 1981, before splitting into specific technical projects  (see Waverider and Starseed, below).   Originally they were a single book covering both exploration to date and development to come;  split into two, they were both edited by Paul Barnett, a.k.a. John Grant, for Westbridge Books and Ashgrove Press respectively.   The speakers were the late Chris Boyce, Ed Buckley, Andy Nimmo, the late A.T. Lawton, John Macvey, Prof. Terence Nonweiler, David Proffitt RN, Prof. Archie Roy and Prof. Oscar Schwiglhofer.   The plan was for each to contribute a guest chapter, but only four materialised and all those were included in “New Worlds for Old”.

“New Worlds for Old” was subtitled ‘The New Look of the Solar System’  (not used in the book itself)  and was inspired by a lecture ‘The Artist’s View of the Solar System’, by Ed Buckley in 1979.   The idea was that he and Gavin Roberts would illustrate both the classic ideas of the Solar System and the ‘new look’ revealed by spacecraft, but it was somewhat vitiated by spreading the art over two books.

Like “Man and the Stars” the project generated many original ideas, and two in particular live on – Waverider and Starseed.

Waverider was a new principle of flight discovered by Terence Nonweiler in 1957 when working on man-carrying vehicles to be launched by Blue Streak, in the British space programme cancelled by Harold Macmillan’s government in 1960.   It earned him the Royal Aeronautical Society’s Gold Medal and some work was done on a hypersonic airliner version by the Royal Aeronautical Establishment, but only a few enthusiasts remembered it thereafter.   Nonweiler’s lecture in the Interplanetary project sparked a whole raft of ideas for Waverider applications, and I presented these in 1977 at the L5 Society (Western Europe) Conference in a paper, ‘The Rôle of Nonweiler Waverider Spacecraft in Exploring and Developing the Solar System’, published in abridged form by the Journal of the British Interplanetary Society in 1982.   The Ayrshire Branch of ASTRA then formed the Waverider Aerodynamic Study Programme  (WASP), in which Gordon Dick  (later Gordon Ross)  achieved the first free flight of a Waverider model, first rocket launch to free flight and first radio-controlled flight.

In 1984 I mentioned Waverider in the keynote speech at ‘The View from Earth, 1984’ conference in Big Bear Lake, California, and was invited to speak on it at the Jet Propulsion Laboratory and NASA Ames Research Center.   Dr. Jim Randolph of JPL’s Advanced Mission Planning favoured Waverider as the carrier for the Starprobe, a sophisticated mission to the Sun, and negotiations on that continued till the 1990s.   Gordon spoke on ‘The Amateur’s View of Waverider’ at NASA’s First International Waverider Symposium in 1990, and he and I collaborated on an article, ‘Flight in Non-Terrestrial Atmospheres, or the Hang-glider’s Guide to the Galaxy’, which appeared in Analog in January 1993.   In working on it Gordon made a major breakthrough in the design of flexible-wing Waveriders, which he announced at the Edinburgh International Science Festival in 1995, going on to produce a design for a flex-wing Waverider space station lifeboat which I revealed at the Astronomical Society of Edinburgh in January 1996.

Meanwhile the University of Maryland has pursued its own course of Waverider design and this has borne fruit in the US Air Force X-51 project, flying a Waverider warhead on a scramjet hypersonic missile.   As a pacifist, Nonweiler might not have approved.   In November 2010, Time magazine described ‘the US Air Force Waverider’ as the 4th best invention of the year.   To counter that we need to promote the true history of Waverider, the most recent version of which is in “Rocket Science”, edited by Ian Sales  (Mutation Press, 2012).

My book “Waverider, a Spacecraft in Waiting” is written in first draft and is looking for a publisher.

Project Starseed began with a proposal in 1979 by the late John Braithwaite and the author for a manned orbiting observatory, to be constructed from four Space Transportation System (space shuttle) External Tanks and an Aft Cargo Carrier, to go on the end of one of them, which had already been designed by Martin Marietta but was never used. At the same time ASTRA held a seminar on nuclear waste disposal in space at the Glasgow Film Theatre during the ASTRA/Third Eye exhibition, ‘The High Frontier, A Decade of Space Research’ in October 1979, and the two themes then came together in a major scenario.

Details were still being worked out when “Man and the Planets” went to press, and a more complete, formal version was published as two papers in the Journal of the British Interplanetary Society, April and September 1983, and a popular version in Analog, February 1985, with updated versions in various magazines since. The proposal took the ideas of space advocates, such as space habitats and solar power satellites, first advocated by Gerard O’Neill, and rearranged them into a format that looked much more practical.  Prof. O'Neill asked me to present it at his Space Studies Institute's Space Manufacturing Conference at Princeton University in 1985.

Vitrified nuclear waste would be carried to a mass driver in low Earth orbit, using a heavy-lift booster with two STS External Tanks, proposed by Bob Parkinson of the BIS and probably flown from an equatorial launch site. We were advised on safety and other aspects by Capt. Chester Lee of the STS Office at NASA headquarters, and the astrodynamical calculations were performed by the late Archie Roy. The numbers proved remarkably good, and it seemed that the world’s anticipated output of nuclear waste in the 1990s could be launched into interstellar space with one heavy lift booster every three days.  But even with economies of scale from mass production, the most optimistic estimates came out at 25 times the cost of burial, and could only be justified if space disposal would lead to a long-term solution of the world’s energy problems.

With steady addition of  External Tanks, the Starseed could develop through a succession of 'Outgrowths'. In its final configuration it would have 198 tanks, 180 of them with artificial gravity, which at the maximum allowable spin rate would be one-sixth g, equivalent to gravity at the lunar surface. O'Neill had calculated that a workforce of 2,000 would be needed to build powersats, and if 100 tanks were converted to living quarters, with ten decks 4 m high, then people would be living just two to a deck, in much more comfort than on the average oil rig.   We calculated that if Starseed could reach the output level of a major ground-based steelworks, then after nine years nearly 500 powersats would have been built – enough for all the energy needs of the world in the twenty-first century, as anticipated in the early 1980s.

If 500 powersats were built, each massing 60,000 tons, their total mass would be 30 million tons.   530 million tons of Moon rock would have to be processed.  The 500 mt of residues would be mainly silicates and iron, which can be processed as pre-stressed concrete – enough hull material to build 50 of O’Neill’s Island One space settlements. Recovering the hydrogen, carbon and nitrogen deposits on the surface of the lunar grains from the solar wind would provide 180,000 tons of volatiles, enough to make six of those settlements habitable, each capable of supporting 10,000 people.

The weakness of the original scenario was its dependency on nuclear waste disposal in space, which was always going to be a hard sell, no matter how effective the safety precautions.  The objection that we shouldn’t be spreading our pollution up there can be countered, but the public fear of radiation and confusion over radioactivity were always going to be show-stoppers.  Burial is the obvious strategy.  It means burial for millions of years, at least for actinide wastes, but a great deal of thought has been given to that, including what would happen if these wastes were excavated by an impact (the answer to which is, if it’s big enough to do it, what the impactor digs up is the least of your problems).

Taking nuclear waste out of the equation has allowed the first conceptual redesign of Starseed in over 30 years, in researching and writing “Incoming Asteroid! What could we do?”   In making sure of deflecting an incoming asteroid, many of the Starseed elements can be put in place, enough to continue with the streamlined scenario thereafter.   Gaining access to the resources of Jupiter would allow a major expansion of the human race across the Solar System, and we could reach the nearer stars in a few centuries and be at the far side of the Galaxy in 20-30 million years.

The book was published by Springer in November 2013 and is available from them, through Amazon and from booksellers.

Enough time has elapsed that producing second editions of “New Worlds for Old” and “Man and the Planets” would now require too many changes – it would be better to produce a new Solar System book, working title “The Fold of the Sun” (with the permission of the late Prof. Edwin Morgan). Synopsis available.