THE STONES AND THE STARS:  BUILDING SCOTLAND’S NEWEST MEGALITH 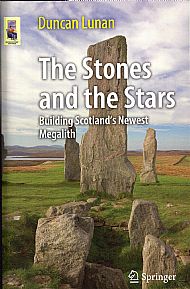 As the Earth turns on its axis, and as it orbits around the Sun, the rising and setting positions of the Sun move on the horizon during the year.   The corresponding positions for the Moon vary not just from month to month, but over a complex pattern as the Moon’s orbit swings around us with a period of 18.61 years, and with more subtle movements superimposed.   The rising and setting positions of the stars alter over a period of 26,000 years, caused by a wobble in the Earth’s axis called ‘precession of the equinoxes’.   All of these effects are overlaid by a slow shift in the tilt of the Earth’s axis, which has altered by half a degree in the last five thousand years.

Around the world, in prehistory, human beings observed these events and incorporated them, in many different ways, into structures that they built – including the stone circles and rings of Europe, Scandinavia and the British Isles.  In 1978, Duncan Lunan was given the opportunity to re-enact part of the process, in which he designed and built the first astronomically aligned stone circle in Britain for over 3000 years.

The circle stands in Sighthill Park in Glasgow, the largest city on Scotland, and was built in 1979 with the help of a Royal Navy Sea King helicopter.   The circle was conceived as a tribute to four experts in archaeoastronomy  (Prof. Alexander Thom, Dr. Archie Thom, Dr. Euan Mackie, Prof. Archie Roy), all of them closely connected with the city.   Their work on prehistoric standing stones and rings has aroused great interest worldwide.

The project was documented by the artist and photographer Gavin Roberts and this archive has been added to by Linda Lunan, Chris O’Kane, Mark Runnacles and others.   Duncan has compiled observations since of solar, lunar and stellar events at the site, casting light on some of the questions about the construction and use of the ancient megalithic observatories.   The first lunar events since building the circle, in 1987 and 1996, were spoiled by weather conditions, but a full major standstill set was obtained in 2006-2008.   The next minor standstill opportunity will be in 2015-17.

Until recently it was hoped to renovate the circle, complete it and make it a tourist attraction as originally planned, and to make it a symbol of the rebirth of the area.   Duncan Lunan has given numerous talks on it to local and national societies and other groups, particularly a major presentation at the Scottish Power Theatre planetarium, Glasgow Science Centre, and the software is available to repeat that in planetaria elsewhere.

Introduction.   Reasons for writing the book now:  the first lunar and stellar observations on site, compiled in the last four years, and plans to complete and renovate the circle.

Part 1.   Background to the Controversy.

Chapter One.  "Archaeologists v. Astronomers".   Were the ancient sites observatories?   How the controversy arose in the late 1960s.

Chapter Four.  “Archaeoastronomy in the British Isles”.   Megalithic sites in Europe and Britain, and how they relate to what the observer would see;  in short, an astronomer's reasons for accepting the argument that the ancient sites were observatories.

Chapter Five.   Layout and Location".   How the Glasgow Parks Astronomy Project came about;  its early stages.   Finding a suitable site for the megalith;  research into the site's history, including prehistoric astronomical features;  designing an astronomical megalith.

Chapter Six.  "Selecting the Stones".   The adventures and difficulties of finding suitable stones and bringing them into the city.

Chapter Seven.  "Operation Megalithic Lift".   Finalising the alignments of the stones;  organising the helicopter operation;  the big day itself.

Chapter Eight.  Events on Site".   Solar, lunar and stellar observations at the Sighthill megalith, to date, and the light they shed on the uses of the ancient sites.

Chapter Ten.   “The Circle, Present and Future”.   The Sighthill Circle’s place in the community and its unrealised potential.

By Duncan and Linda Lunan.

The Sighthill stone circle is the first astronomically aligned one to be constructed in the British Isles for at least 3500 years.   It was built in Sighthill Park in Glasgow, overlooking the M8 motorway due north of the city centre, as part of the Jobs Creation and Special Temporary Employment Programmes in 1978-79.   Duncan designed it as Project Manager, with the late John Braithwaite as Technical Supervisor;  the stones came from Beltmoss Quarry in Kilsyth and the layout was completed by a Royal Navy helicopter at the spring equinox of 1979.   The circle is dedicated to the late Prof. Alexander Thom, Dr. Archie Thom, Prof. Archie Roy, and to Dr. Euan MacKie, all experts in the field and former staff members of Glasgow University.   The full story to the middle of 2012 is told in Duncan’s book “The Stones and the Stars, Building Scotland’s Newest Megalith”, which was published by Springer in November 2012 and is available from Amazon, Waterstones, W.H. Smiths and other bookstores and chains.

Just after the book was published, Development and Regeneration Services of Glasgow City Council declared their intention to destroy the circle and the park in order to show that Glasgow was serious about bidding for the 2018 Youth Olympics, whose Athletes’ Village would be constructed on the site.  A campaign to save the circle was immediately begun by Mandy Collins, and by August 2013 the online petition was nearing its target of 5000 signatures, plus another 600-plus on Facebook.

Duncan gave a talk about the circle and the campaign at the Ogilvie Centre of St. Aloysius Church on Thursday 20th June 2013, after which we went up to the circle to see the sunset, which is in virtually the same place for three days either side of the summer solstice.   At the solstice on Friday 21st there was a second talk at the circle itself, followed by a Druid/pagan ritual with over 70 people.   Both evenings were cloudy but nevertheless the events went well.   Many of the participants were in costume and the circle was decorated with ribbons, lanterns, flowers and offering of food and drink, especially fruit.

During July Glasgow City Council made new planning applications for the Sighthill area, with public consultation, and there were two concerts to draw attention to that.   The first was a Folk and Acoustic Concert in the Blythswood Room of the Mitchell Library, Glasgow, on the afternoon of Saturday 13th July.  The stars were members of the Whistlebinkies and others taking part included Ajna Starheart, Gareth Paterson, Stewart Horn, Kenchuto and Christy Connor-Vernal.

The second event was a large pop concert at Platform in Easterhouse, organised by Stuart Braithwaite of Mogwai, whose father was my second-in-command when Duncan built the circle in 1978-79.   The Platform concert featured Stuart Braithwaite, Aidan Moffat, Eugene Kelly, Emma Pollock, Remember Remember, RM Hubbert, Adele Bethel (DJ) and special guests The Twilight Sad.   Platform kindly agreed to donate profits from the pop concert to the campaign.

At a meeting with Development and Regeneration Services on 4th July 2013, it was made clear that the hill is going to be reshaped so much that there will be no place for the circle in the new plan and the search began for a new location. Eight potential sites were evaluated and one was chosen at the eastern end of the former park. We explored the possibility of a new design integrated with a labyrinth, or next door to it, but both proved impractical. (The Glasgow Labyrinth Project now has a new site of their own on Kelvin Meadows.) It was announced that not only would the circle be recreated, but the topsoil would be removed and replaced at the new site for the sake of those who had scattered their loved ones’ ashes at the previous site.

The Sighthill stones were removed intact in April 2016 and temporarily buried at the proposed new site, though they were to be disinterred after the location was moved further west. During the removal the time capsule was discovered and removed; the lid fell off during the process and remarkably enough the contents were found to be intact, so they will be reburied at the new site. In the course of levelling the ground for the new housing development, a raised platform has been created overlooking Pinkston Road. It will be the highest point at the eastern side of the development, and much more visible than the previous circle was.

For the continuing story at the new site, see ‘Stone Circle Recreated’.

A very interesting campaign that has been brought to Duncan's attention is:

The bridge to the Stone Circle 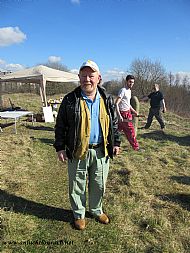 Duncan talks about the Stones

Duncan through the Stones

The images above show the last event at the Stone Circle on the 20th March 2016 before its removal in April 2016.  Images are copyrighted but copies of the images can be purchased through  feedback tab