Once the platform for the new circle had been created, a visit to it was arranged in June 2017, at which the centrepoint for the structure was fixed and preliminary markers were set up for the four arcs of stones, following the original plan. Linda Lunan took photographs of three of the arcs, but the northwest quadrant was blocked by a high bank which, we were told, would not be removed until after the stones had been re-erected.

It was thought that would happen late in 2017, and I drew up an observing programme for dates up to the end of September, when Linda and I briefly left the country. The weather prevented any observations up till then, and also delayed the contractors. After we came back to Scotland I drew up a contingency plan to calculate the alignments without observations, if necessary, though even a few actual sightings of events would make it all much easier.

In April 2018 Gerry Cassidy and I returned to the site with more accurate bearings for the theoretical alignments, and with the help of surveyors we pinpointed them on the horizon in the three previous arcs, while the temporary posts were moved to mark the cardinal points. Gerry took photographs on each bearing, but the weather was much mistier than forecast. To our surprise the bank in the northwest had been removed and the whole horizon was now clear, so we went back on June 13th to take those pictures. Again the distant horizons were obscured by mist.

On June 28th at last we had a clear evening when we were able to photograph the setting Sun, still close to its solstice declination, and soon afterwards the rising Full Moon, not far from its minor standstill declination. Working up those results with the help of the Interactive Sky Chart on the Heavens-Above website, I found that I could do the same for the various events photographed over the years at the previous site, then transfer the grids to the photos taken from the new one. Frustratingly the exact position of sunset was blocked by the upraised arm of a digger in Gerry’s June 13th photo, so we had to go back once more and took the opportunity to check the new bearings I had calculated meantime. On that last visit on July 19th we finally had a clear sunny day, so Gerry took new photos centred on all the revised bearings, and at the end of an intense month’s work I turned over the finished results to the City Council Planning Department on August 2nd 2018.  At that time re-erection was scheduled for November 2018 in hopes to have an event marking the mid Winter Solstice in December 2018.

The next phase was for the contractors to prepare foundations for the stones, but problems developed because in moving the stones from burial to a secure yard near the reconstruction sites, the original numbering had accidentally been lost. After several false starts, Gerry and I went up and re-identified the stones on December 10th. The plans were finalised by late January and re-erection work began on February 13th. By the 22nd the steel frames to hold the stones were assembled on site and the first stone scheduled for re-erection (the one marking the northerly minor standstill moonrise) was in place and ready to be installed.

As of March 1st, ten stones had been re-erected and cemented in. By March 5th the most massive one, the 4.5-tonner marking moonset at furthest south, had been added. The large stone marking minor standstill southerly moonset was to be next, but when we arrived it had just broken as it was being lifted. Fortunately the four remaining spare stones, which have been lying under a tree by the old site since 1979, have been brought to the new site with the rest, and the largest of them was immediately pressed into service. The midwinter sunset stone was added soon after.

By Monday March 11th all 17 stones including the last, the central one, had been raised. Health reasons prevented us from going to inspect it, but Morgan Sindall staff sent me photos of it before cementing in. It now faces in the opposite direction from its orientation at the old site, but that and one or two other stones similarly reversed will make it easy to tell the old from the new in photographs.

On March 13th I took part in a podcast for a station in New York, covering the circle re-erection and also the mediaeval mystery of the Green Children (see ‘Children from the Sky’).  The circle’s re-erection had been completed by Thursday 14th and I was able to show the result in an update on the circle for Prestwick Rotary Club that night.  Glasgow City Council scheduled a media event for the spring equinox on March 20th , which was the 40th anniversary of the Sighthill stone circle’s completion by Royal Naval helicopter at its original site, and that has generated extensive coverage in the Scottish press as well as the BBC and STV websites, and further afield in England, Northern Ireland, the Channel Islands and the USA.

The circle is now complete at its new site, with equinox markers added as John Braithwaite and I proposed in the Phase 2 for 1979 which never happened.   Because the plans for the landscaping in 1982 were misread, the stones have been half-buried since 1982, but are now once again at their true height, and the shadow patterns at the key sunrises, sunsets, moonrises and moonsets will be much more obvious.   I’ve eliminated the prehistoric Rigel alignment, which was the only one which people had to have explained, and reused those two stones to mark the equinox sunrise and sunset.   Because the ground at the new site is flat, I’ve dropped the original intention to have events viewed from across the tops of the stones at adult eye level, so the earth bank around the southern arc  (created in 1980 but never stabilized and quickly washed away)  is no longer needed, and shadow patterns will be more prominent.

The time capsule which was buried by the central stone in 1979 was recovered during their removal in 2016, and the packages within it were found to be intact.   With new material added, including my book The Stones and the Stars  and the March 2019 issue of Astronomy Now to fix the re-erection date, the capsule will be reburied by the central stone around the time that the circle is  opened to the public in summer 2020.

At the same time we hope to see a plaque mounted to identify the site, say how and when it was built, how it works and to whom it’s dedicated – again as planned in 2019.   The lunar stone which snapped during attempted re-erection broke cleanly along a fault line, and its two upended halves could be used to support the plaque, leaving the remaining three spare stones available for other use – and there’s already a suggestion for that.

I gave a talk to the Rotary Club of Troon on Tuesday July 16th, and meanwhile Gerry Cassidy and I observed midsummer sunset, and David McGlone observed the September equinox. Practical difficulties have prevented me from fully analysing the results so far, but it seems atmospheric refection was even greater at both events than it had been during observations at the old site, suggesting that air pollution over the city is worse than before. The next event will be the reburial of the time capsule, probably at the end of November, and in December we hope to capture both the evening rising of Rigel and the midwinter sunrise and sunset. Discussions are also under way about possible use of the remaining stones at other, linked sites.

Although there’s a long way to go, a great deal of what was hoped for in 1979, 1982, 2001, 2008 and 2010 has now been accomplished.   Particular thanks for that are due to Linda, who restarted the campaign to restore and complete the circle in 2010;  to Mandy Collins, who started the petition to save the stones in 2012;  to the 6500 people who signed it, including members of the Druid and Pagan communities and particularly David McGlone, who represented them at meetings with Glasgow City Council, helped in the selection of the new site, and conducted their closing ceremony at the old one;  to Nick Fuller of the Glasgow Labyrinth Project, who also attended meetings with GCC and played a key part in the new site selection;  to BBC Radio Scotland, the Herald and the Scotsman, particularly Gerry Braiden and Peter Ross, for their early support;  to Alasdair Gray as patron of the campaign, to Dr. Euan MacKie as the circle’s only surviving dedicatee, and Dr. Kenny Brophy of Glasgow University and Dr. Alan Cayless of the Open University for their support throughout;  to Stuart Braithwaite and all the musicians who took part in the fundraising concerts in 2013;  to the senior members of GCC who responded to the petition;  to Muir Simpson and Jackie Harvie, who took the reconstruction on board, and to Graeme Baillie who carried it forward;  to Gary Moore of VHE, for the removal of the stones in 2016;  to Rory Clark of SWECO for his work planning the foundations;  to Stephen O’Brien, Chris Ebsworth, Richard McDermott, the survey teams, Ivor for the inductions and safety equipment and to everyone else at Morgan Sindall who made the reconstruction such a success, and to Paul Kane of GCC Public Relations for the media event on Wednesday 20th March;  and again to Linda and to Gerry Cassidy, who’ve been my supporters throughout the reconstruction campaign.   That’s by no means a full list, but I hope everyone who has played a part knows how much their participation has been appreciated.

At the moment, the stone circle is still part of a building site, fenced off and only accessible by arrangement with the contractors, going through Health & Safety instruction, and so on.  It will be opened to the public sometime in summer next year, I hope in time for the summer solstice.

At present the circle can be seen from Baird Street, or from the short stretch of Pinkstone Road which isn't closed off, by the BMW showroom.  The best view of it is actually from the road bridge going from Baird Street over the M8 motorway towards Springburn.

(All words and images are copyrighted. Please contact Duncan Lunan if you wish to use them.)

To listen to Duncan on BBC Radio Scotland’s “News Drive” on the 19th June 2017 speaking about the recreation of Sighthill Stone Circle please go to:

Ancient Astronomy and the Sighthill Stone Circle  - By Duncan Lunan

The Herald coverage of the start of the recreation of the Stone Circle. (page 8 - News) 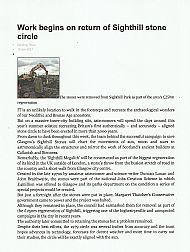 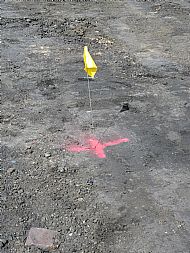 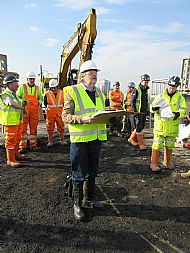 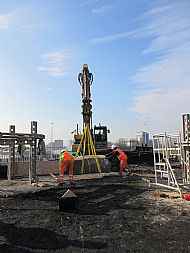 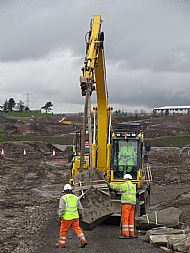 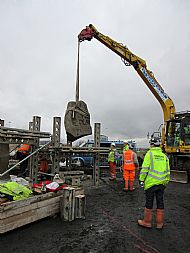 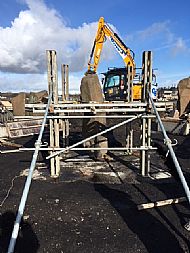 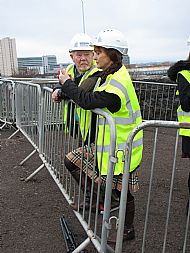 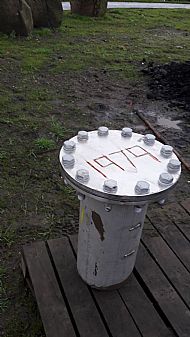 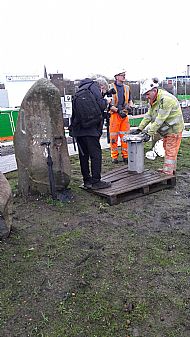 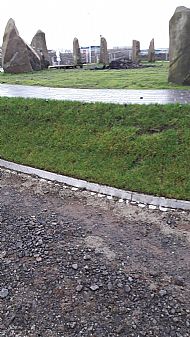 All words and images are copyrighted.

Please contact Duncan Lunan if you wish to use them.