The Moon will be Full on January 6th, and it will be New on January 21st. The Moon occults Uranus on January 1st, is near Mars on the 3rd and 31st and is near Venus and Saturn on the 23rd, before passing Jupiter on the 25th.

After its successful return from orbiting the Moon, NASA’s Orion spacecraft has been brought ashore at San Diego and returned to Kennedy Space Centre for processing. Korea’s Danuri spacecraft has successfully achieved orbit around the Moon. Japan’s Hakuto is on its way, on a low-energy trajectory to reach the Moon in April, when it will release NASA’s Lunar Flashlight into orbit before landing with the Emirates’ Rashid rover. Lunar Flashlight will try to photograph some of the craters at the lunar south pole, where ice has accumulated in regions never touched by sunlight. It wasn’t ready for launch with Orion, but that’s turned out to be just as well, because several of the microsatellites carried by the Cryogenic Propulsion Stage failed because their batteries ran down during the unexpected wait for launch. The USA has several more orbiters and landers in preparation, as do India, China and others.

In the new wave of lunar exploration the only loser at present is Russia, which had announced it would definitely return to the Moon with Luna 25 before the end of the year. All such Moon and Mars missions are now halted by the withdrawal of international participation, and that won’t be resumed any time soon.

All the planets are visible in the sky at some time this month, though some will be easier to see than others. Mercury is at inferior conjunction, on this side of the Sun, on the 7th. It appears in the morning sky in the second half of January, near the Moon on the 20th and at greatest elongation from the Sun on January 30th, but will be low in the sky throughout.

Venus is bright but also low, setting at 6.30 p.m. in January, passing Saturn on the 22nd and near the Moon on the 23rd.

Mars is still in Taurus, to the left of the Pleiades and above the Hyades, setting at 5 a.m.. In my Christmas Day article, I mentioned the retrograde (western) movement of Mars around opposition, which was in December, and that ends on January 12th when Mars is briefly at rest among the stars, before resuming its normal motion to the east. The Moon is near Mars on the 3rd, occulting it as seen from the Indian Ocean, and they’re close again on the 30th, when both will be to the left of the Pleiades. On the 31st the Moon occults Mars again, this time visible from central America and the southwestern USA.

Saturn in Capricornus sets at 6.30 p.m. in January, and is passed by the much brighter Venus on the 22nd, before both are joined by the very young Moon on the 23rd.

Uranus in Aries was multiply occulted by the Moon last year, two of the events visible from the UK, and on January 1st it will happen again around 10.20 p.m., depending on location, for viewers north of a line from Cork to Norwich, with the reappearance at 11.08 p.m., as seen from Edinburgh. The January issue of Astronomy Now has a detailed chart of the event for Edinburgh, Manchester and Birmingham. A repeat event on January 29th will be visible only from Japan, parts of China and eastern Russia.

Neptune, between Aquarius and Pisces, sets at 9.30 p.m. in January. Neptune appears near the Moon on January 25th.

The Quadrantids meteor shower peaks on 3rd – 4th January but is spoiled this year by moonlight, though there’s a better chance of seeing them from 4 a.m. onwards as the Moon sinks. The meteors appear to radiate from a point 9 degrees north of Nekkar, the brightest star at the top of Boötes, the Herdsman. They take their name from the obsolete constellation of Quadrans Muralis, the Mural Quadrant, formed in 1795 by Lalande from stars in Boötes and Draco, but not recognised by the International Astronomical Union when they formalised the list of constellations in 1930.

The source of the meteors seems to be a body designated 2003 EH1, though as its name implies that appears to be an asteroid, like Phaethon, the source of the Geminid shower in December. It may be identical with a comet C/1490 Y1, seen by Chinese observers 532 years ago. If true, that would lend weight to the idea that some asteroid may be inactive comets, more threatening than they look because there could be dense masses of ice inside what appear to be dust balls.

Duncan Lunan’s most recent books, From the Moon to the Stars and The Other Side of the Interface, published by Other Side Books in 2019 and 2021, are available through Amazon or from the publishers. For details and for his other books see Duncan’s website, www.duncanlunan.com. 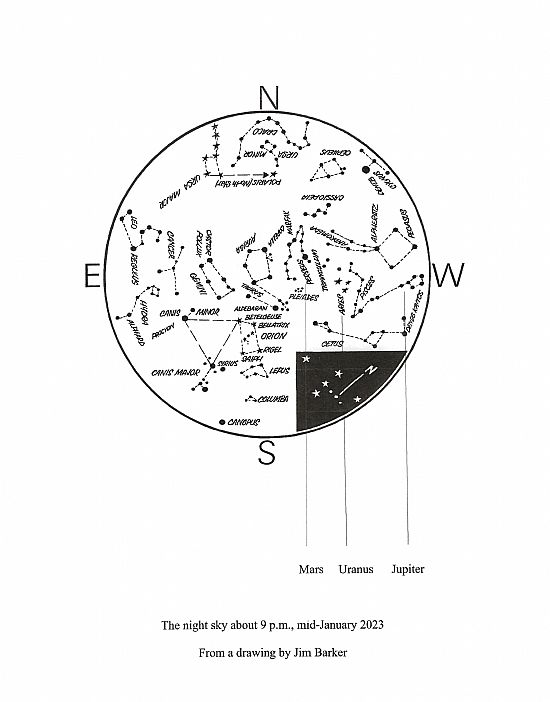 The Sky Above You

I began writing this column in early 1983 at the suggestion of the late Chris Boyce.   At that time the Post Office would allow 1000 free mailings to start a new business, just under the number of small press newspapers in the UK at the time.   I printed a flyer with the help of John Braithwaite  (of Braithwaite Telescopes)  offering a three-part column for £5, with the sky this month, a series of articles for beginners, and a monthly news feature.   The column ran from May 1983 to May 1993 in various newspapers and magazines, but never in more than five outlets at a time, although every one of those 1000-plus papers would have included an astrology column.   Since then it’s appeared sporadically in a range of publications including The Southsider in Glasgow and the Dalyan Courier in Turkey, but most often, normally three times per year, in Jeff Hawke’s Cosmos from the first issue in March 2003 until the last in January 2018.   It continues to appear monthly in Troon's Going Out and Orkney News. Enquries from other outlets welcomed!

The monthly maps for the column were drawn for me by Jim Barker, based on similar, uncredited ones in Dr. Leon Hausman’s “Astronomy Handbook”  (Fawcett Publications, 1956).   Jim had to redraw or elongate several of them because they were drawn for mid-US latitudes, about 40 degrees North, making them usable over most of the northern hemisphere.   The biggest change needed was in November when only Dubhe, Merak and Megrez of the Big Dipper, as the US version called it, were visible at that latitude.   In the UK, all the stars of the Plough are circumpolar, always above the horizon.   We decided to keep an insert in the January map showing the position of M42, the Great Nebula in the Sword of Orion, and for that reason, to stick with the set time of 9 p.m., (10 p.m. BST in summer), although in Scotland the sky isn’t dark then during June and July.

To use the maps in theory you should hold them overhead, aligning the North edge to true north, marked by Polaris and indicated by Dubhe and Merak, the Pointers.   It’s more practical to hold the map in front of you when looking south and then rotate it as you face east, south and west.   Some readers are confused because east is on the left, opposite to terrestrial maps, but that’s because they’re the other way up.   When you’re facing south and looking at the sky, east is on your left.

The star patterns are the same for each month of each year, and only the positions of the planets change.   (“Astronomy Handbook” accidentally shows Saturn in Virgo during May, showing that the maps weren’t originally drawn for the Hausman book.)   Consequently regular readers for a year will by then have built up a complete set of twelve.