The Elements of Time 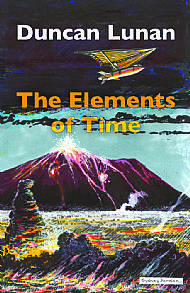 The Elements of Time, my collection of time-travel stories, was republished, in revised, expanded and illustrated form, in paperback and PDF by the new Scottish SF magazine Shoreline of Infinity, on Wednesday 7th September 2016. The four classical elements are represented in the collection's main stories, featuring time travel by land, sea, air and fire, supported by three shorter stories also involving time travel. Three of the main stories were first published in the USA, in Analog, Isaac Asimov's Science Fiction Magazine and the anthology series There Will Be War, and all three were recommended for the Science Fiction Writers of America Nebula Award. The fourth was to be published in Amazing Stories, when the magazine ceased publication, and all four of the main stories are accompanied by Notes. The other stories appeared in the UK, in Dream, West Coast Magazine, and the Centre for Contemporary Arts collection To Arrive at Where We Started; 'Faces Bearing the Stamp of Time' was first published in With Time Comes Concord and Other Stories, the previous edition of the collection by Brain in a Jar in 2012. The CCA story 'Galileo at the High Frontier' has been added, with Notes; the others have been revised and the Notes altered where necessary.

The new book is illustrated throughout by Sydney Jordan from Dundee, best known as the creator of Jeff Hawke, the world's longest running science fiction comic strip (from 1954 to 1988; Duncan Lunan wrote or contributed to ten of the later stories). The 'air' story With Time Comes Concord was illustrated by Sydney for its first publication in Analog, and he has now provided illustrations for all the other six stories as well as a colour cover.

The book was launched on 7th September at 7 p.m. in the RSAS Barassie Works Club, 4 Shore Road, Troon, Ayrshire KA10 6AG, with music and readings, as part of Shoreline of Infinity's highly successful series of 'Event Horizon' performance events.

The book can be purchased through the publishers, Shoreline of Infinity or on amazon and can be ordered through bookshops.